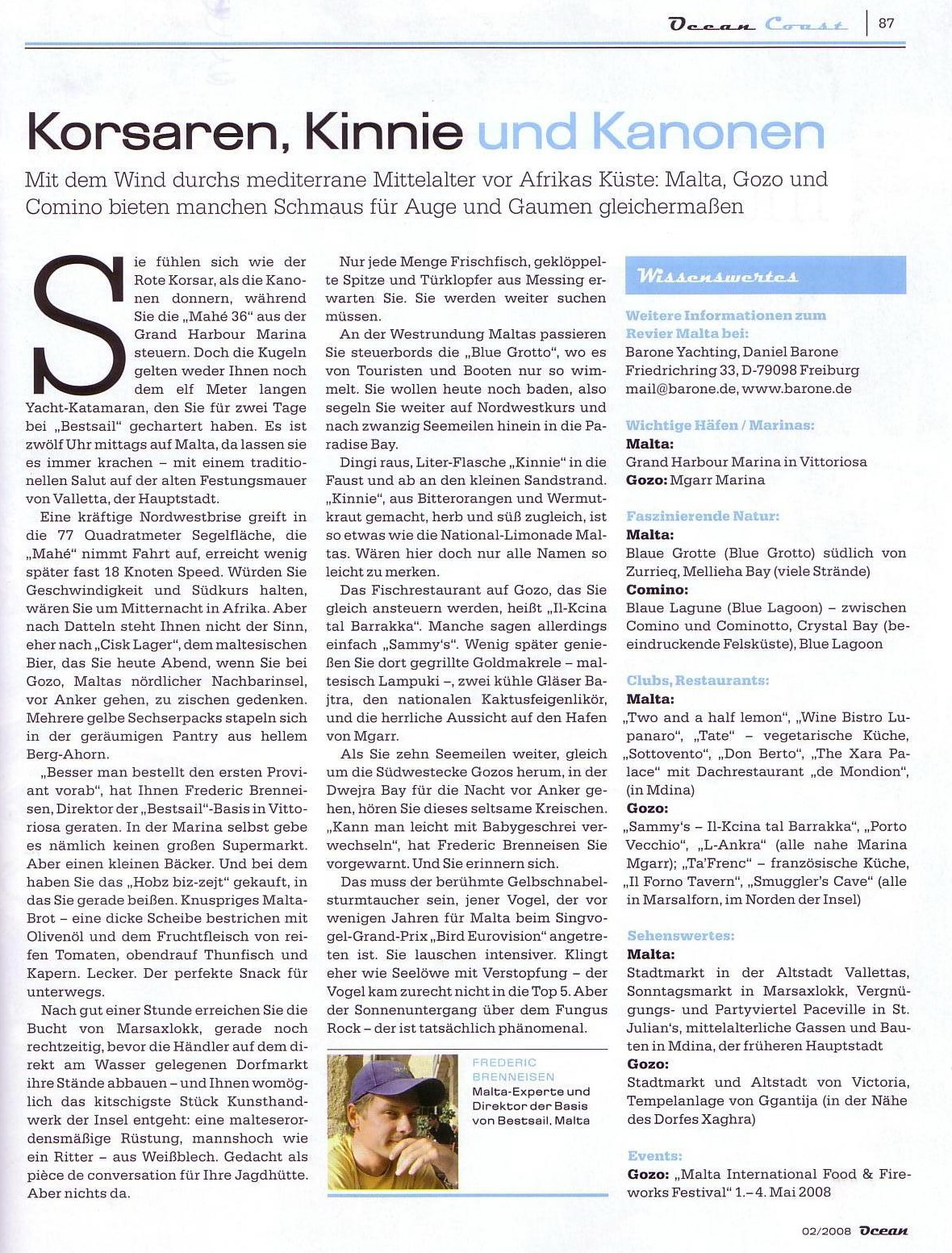 
With the wind through the Mediterranean middle ages in front of Arfica's coast: Malta, Gozo and Comino offer a feast for both eye and tongue.

You feel like the red corsair as the canons rumble while you manoeuvre your way out of the Grand Harbour. The shot however, is neither meant for you nor the eleven metre catamaran which you chartered for two days from Bestsail. It is noon in Malta, it always gets loud there with the traditional salute on the old fortification walls of the capital Valletta.

A strong northwest breeze grips the 77 square metre sailing surface and the Mahé gains speed so that it runs under 18 knots only minutes later. With the south course and speed retained, you could arrive in Africa by midnight. But you prefer 'Cisk Lager' instead of dates, the Maltese beer which you think about opening this night when anchoring in Gozo, Malta's neighbouring island. Multiple yellow 6-packs of the drink are piled on top of each other on the spacious pantry which is made out of light maple.

'It is advisable to order the first provisions in advance' Frederic Brenneisen, the director of the Bestsail base in Vittoriosa recommends. In the marina itself there is no major supermarket but a small baker from which you bought the Hobz biz-zejt from which you are taking a bite this second. Crunchy Maltese bread - a big slice coated with a mixture of olive oil and pod of a ripe tomatoe, topped with tuna and capers. Delicious. The perfect snack for 'to go'. After a bit more than an hour you reach the bay of Marsaxlokk, just in time to still catch the tradespeople which will soon dismantle their stands of the market which is positioned close to the waters. After all you should not miss the probably kitchiest handcraft piece of the island: the armour of a maltese knight in life-size - made out of tin plate.

Around the west corner you come to pass the boat and tourist cramped 'blue grotto' on your starbord side. You want to go for a swim today, therefore you continue heading northwest in order to reach the 'paradise bay' after 20 miles.

Get out the Dinghy and move to the sandy beach with a bottle of Kinnie at hand. 'Kinnie' is made out of bitter oranges and wormwood. It has a sweet/ascerbic taste and can be seen as a kind of national lemonade. If only all names here were so easy to remember.

The fish restaurant on Gozo which you will soon be heading to is called 'Il-Kcina tal Barrakka' but some people just call it 'Sammy's'. Soon later you enjoy a fried mackerel - Maltese Lampuki, two glasses of Bajtra the national cactus liqueur and the view over the Mgarr harbour. As you anchor for the night in Dwejra Bay which is 10 nautical miles further, you hear a curious creeching. 'Can easily be mistaken as the screaming of an infant' Frederic Brenneisen has warned you previously. That you remember. It must be Cory's shearwater, the bird which took part in the singingbird grand prix for malta, the 'Bird Eurovision'. You harken more intenesly. Sounds more like a constipated sea lion - the bird did indeed not deserve to enter the top 5. The sunset over Fungus Rock however - is indeed breathtaking.